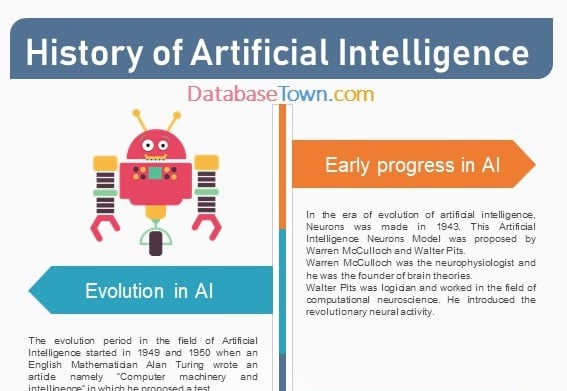 In this modern world, everyone talks about the Artificial Intelligence and machine independence. In every walk of life there is contribution of machine whether it belongs to communication or every day science which have vast impacts on the human life.

The ancient history shows that the first mechanical computer was Abacus. This was the first digital device at that time. This modern concept started developing in Roman and Greeks Empires.

After that in 1206 castle clock was introduced. Later in 1624 slide rule and in 1822 the Charles Babbage’s difference Engine was the early computer which made huge impact in the field of technology.

In 19th century, all the progress has been made in the field of computer to make electro-mechanical devices such as Hollerith Punch Machine and Bush’s Differential Analyzer calculator.

Another step forward, a rapid progress in the shape of Vacuum tubes and small electric components has been made in computer technology.

During the World War II, the Colossus and ENIAC technology made a boom in computer technology.

The world was unfamiliar with Artificial Intelligence before the 20th century.

At the start of 20th century, the concept of Artificial Intelligence came into existence. In early days of artificial intelligence, the scientist tried to attempt and created human mind like intelligent computer devices.

The early research was based on the theory that as to whether the computer have intelligent behavior such as reasoning, learning, judgment making and perceiving the objects like human mind.

In the era of evolution of artificial intelligence, Neurons was made in 1943. This Artificial Intelligence Neurons Model was proposed by Warren McCulloch and Walter Pits.

This first step in the history of Artificial intelligence was made by these two Americans scientists.

Warren McCulloch was the neurophysiologist and he was the founder of brain theories.

Walter Pits was logician and worked in the field of computational neuroscience. He introduced the revolutionary neural activity.

The evolution period in the field of Artificial Intelligence started in 1949 and 1950 when an English Mathematician Alan Turing wrote an article namely “Computer machinery and intelligence” in which he proposed a test.

He was born in 1911 and known as the father of modern computer science. The historical article was based on simple question that was “can machine think?” The ability and behavior of machine in comparison with human can be checked by this test. This test was called turning test.

It was the first academic conference in that particular subject. After one year a workshop was also conducted.

In this period number of high level languages such as FORTRAN, LISP and COBOL were invented. This also helped the Artificial Intelligence to move step forward.

To build foundation in Artificial Intelligence, the researchers concentrate on developing algorithms to solve the mathematical problems. This concept was adopted by German American Computer Scientist.

He was a professor at MIT and considered as the father of modern computer Artificial intelligence. He created the first chatbot in 1966 which named as “ELIZA”. It was natural processing language computer program based on dialogues of question answers.

The first Artificial Intelligence robot was built in Japan in 1972. The name is given to that robot was WABOT-1. It was developed in Tokyo’s University. It was consisted of a limb control system, vision system and conversation system.

The period from 1974 to 1980 is known as first Artificial intelligence winter time. In this time period the computer scientist faced much difficulty in field of Artificial Intelligence where there is no funded form the government institutions.

There was no interest shown due to lack of technological shortage. To develop a powerful Artificial intelligence application, it needs more magnitude of data, uses much storage and processing capability computer systems but these modern machines were not developed at that time. This time was known as first Artificial intelligence winter.

In 1980 the WABOT-2 was developed in Waseda University, Japan. It was musical instrumental robots which have five fingers. It is more advanced and intelligent that has the capability to read the musical notes and play keyboard.

The first national conference of American association on Artificial Intelligence was also held on 1980 in Stanford University. This conference was aimed to increase public awareness and improve teaching and training to the beginners of Artificial intelligence.

The more advancement in computer hardware and increase in computer processing capability to deal with large data, the Artificial Intelligence became more attractive and have more commercial advantages.

In 21st century, the modern Artificial intelligence is increasingly more important in decision making and this system provides facilities to the decision makers to make the decision beyond their knowledge and experience.

In 2011, the neural network wins the German traffic sign recognition. In the same year the IBM Watson won the quiz show, which was arranged to solve difficult questions. It has the ability to use natural languages to solve complex tasks.

The Hanson robotics created a robot “Sofia” which is similar to the human. It has the ability to perceive, make fiscal expressions and can communicate with others like human. It also got citizenship and doing all tasks quickly and have appearance in public.

History of Artificial intelligence shows that the use of modern techniques is gradually increasing day by day and more advancement is happening in different sectors.

Now Artificial intelligence is reached on significant point. We believe that trending form the past, it continues swimming upwards in future.